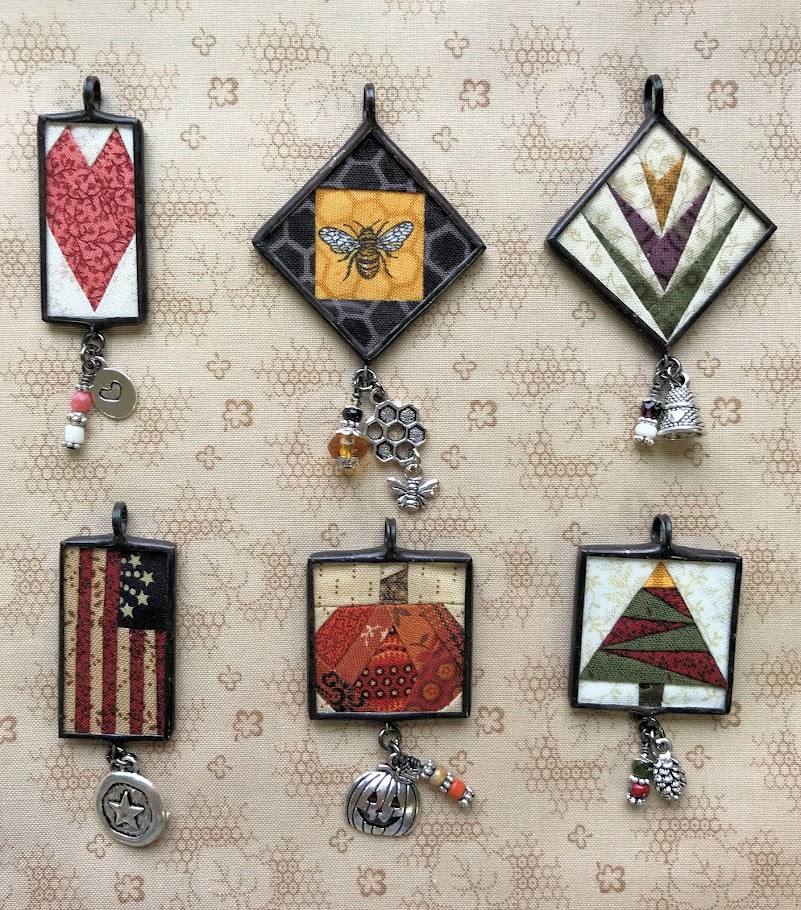 Are you following the blog hop?

Have you seen this great new book by Diane from Butterfly Threads blog?  She and C&T Publishing are hosting a really fun blog hop with lots of reviews and a giveaway each day!  Make sure  to check it out!  I will be giving my valued opinion (haha!) on April 1st, and giving away a copy of this awesome new book.  Trust me...you NEED to have it! 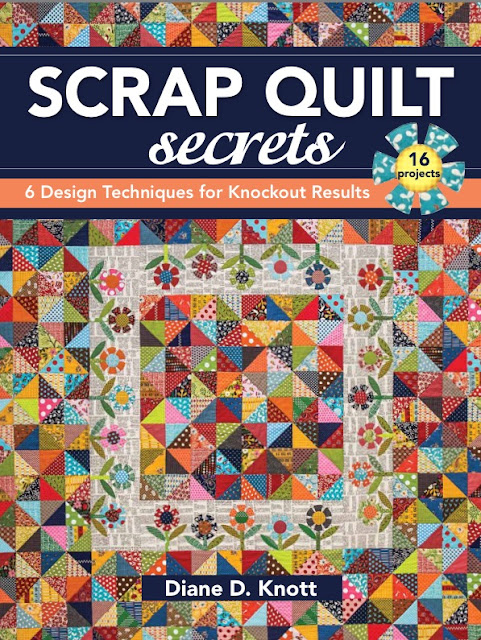 Thanks Dallas, it was a blast!

Well, we made it to Dallas for the quilt show and we had an amazing time!!  My niece, Johnna, went with me and boy is she good help.  It's nice to have someone who can jump up on a table or stool to hang things up high!  She is also really good at making the booth look cute (though she said I need to get some doilys - lol).  Here she is hanging our stars made from yardsticks (this is after she hopped up there and hung the quilts!) 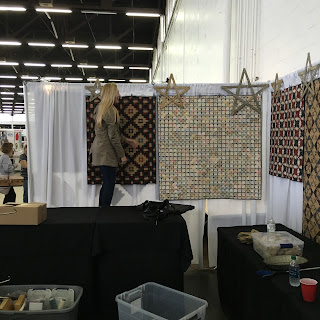 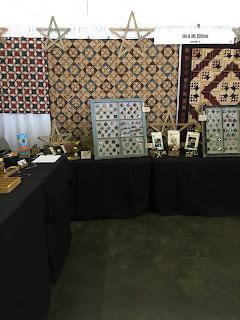 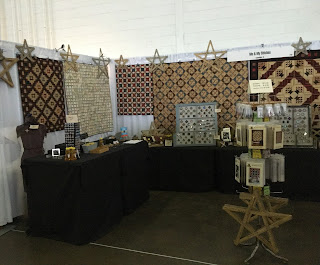 Kind of hard to see it all, but we had lots of little ruler boxes, pin cushions, tons of stars, scissors and socks.  And of course plenty of paper pieced jewelry.  We also sold honey and bees wax (hubby raises bees). 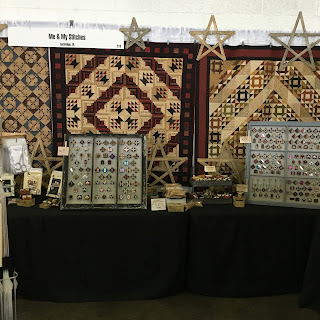 If you enlarge the picture hopefully you can see the boxes better. I just bought the white stand to put them in at Hobby Lobby - it worked perfectly. 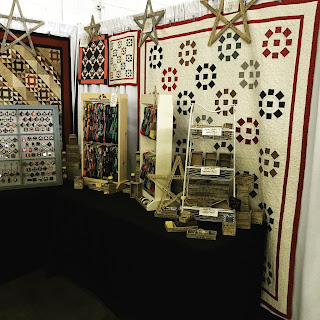 The show opened on Friday and ran through Sunday.  Friday was CRAZY!!!  We were swamped with customers and it was awesome!  The time just flew by.  Johnna was in charge of the cash register and I ran around and talked to people and tried to keep things filled up.  I met so many people that I only knew from blogland, Instagram, etc - so much fun.  Thanks so much to everyone who came and introduced yourself.  There were several people who have been in our Charming program too - so great to be able to put a face to the name.

Saturday and Sunday were not as busy, but still busy enough that I did not have time to walk around and look at the other vendors or the quilts!  I can't believe that I didn't buy a single thing! Although, I had taken a few wool applique blocks to work on and decided on Sunday that I could stitch and talk to customers at the same time (you didn't think I was that coordinated, did you?).  So I got out my block and my Valdani, and guess what?  No needles!  Well, lucky for me I was at a quilt show with a bazillion vendors, so I went 2 booths down to Sew Graceful Quilting and they were kind enough to give me a pack.  Funny thing is, I was working on a block that I got from them as a BOM.  I didn't get a ton of stitching done, but some is better than none. Johnna was watching me and decided she wanted to try it, so she put a few stitches in as well.  I hope to make a quilter out of her some day.

I hate that I don't have any more pictures to share from the show - next time I will know to get there even earlier each day and check out the vendors and the quilts!  I will say that the quilts that I could see on the way in and out were really beautiful - lots of talent in Texas for sure.

We stayed with my cousin and his family, so that made the trip even more special.  He has lived in TX for over 20 years and this is the first time I've been there.  He helped us unload all of our stuff on Thursday, then had to go to work. He also helped us in the booth on Saturday and Sunday.  It was so fun to spend time with all of them - we went to several great restaurants and had a few quiet (not sure it was really quiet, with all of us!) evenings at home too.  On Monday we went to the George W. Bush Presidential library.  That was really interesting.  I loved seeing some of the lavish gifts that were given from various people and countries.  Our favorite was a huge stuffed lion.  Really?  Here...would you like this lion?  I have an extra just laying around.  Johnna and I chuckled about that for a day or two.  There is a section that is a 911 memorial, including some twisted iron from one of the buildings.  It was one of my favorite parts of it all, but very sad. Once again, I didn't take many pictures, but here are a couple... 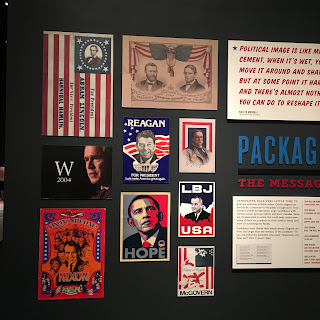 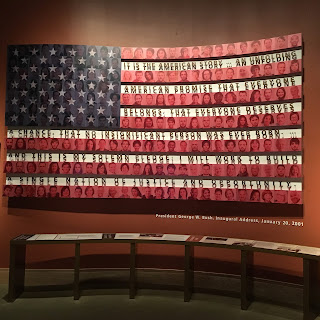 After that we stopped at Gas Monkey - I had never heard of it but Johnna was excited!  We didn't get to see much, as they were taping a show when we were there so a lot of it was blocked off. We checked out the gift shop and took a picture of my cute little niece with the Swag Van. 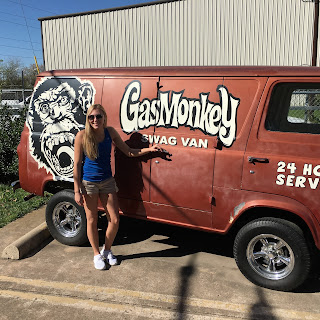 Not only did I not get pictures of the quilt show, I didn't get any of my cousin and his family!  What the heck was I thinking?  The only one I have is this...my cousin and I - we were outside of Babe's waiting for a table. 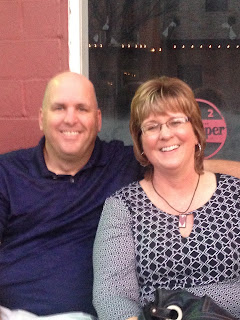 We left bright and early Tuesday morning, and made it home almost 13 hours later.  I was ready to be out of the van and in my bed!  It was so much fun to be at the show and to hang out with family, but I missed my hubby and kitties!

If you came to the show and said hi...thank you!  It was a blast and we plan on making this an annual trip!
Posted by Me and My Stitches at 8:49 AM 5 comments: 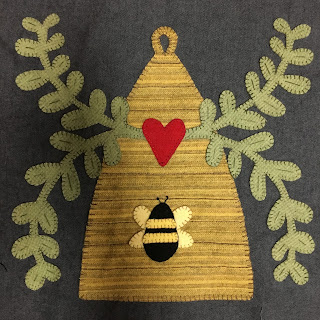 And 2 seconds after I took the first picture, this happened! 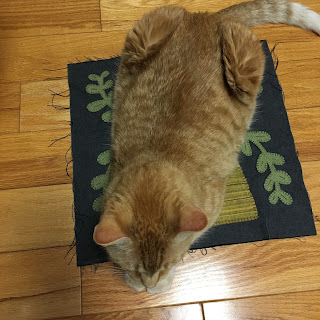 And I couldn't resist this cute little face...Isn't he just adorbs? 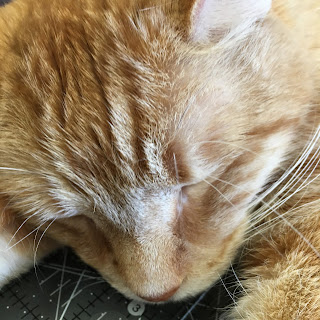 I think they know that I'm leaving soon (headed to Texas - if you don't know the details, read back a post or two!) because they are sticking pretty close.  They both felt the need to sit and stare at me yesterday! 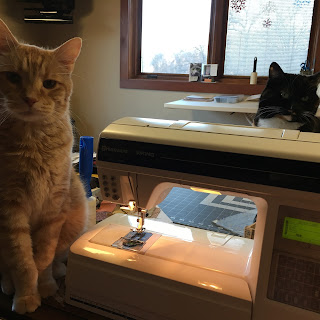 Another stare down by Callie!  She's way too cute to be annoyed by a little staring. 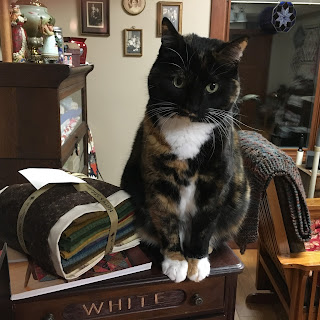 I feel like all I did on Saturday (Caturday) was take pictues of my cats.  Yep...getting closer to being the crazy cat lady!

Skype sewed with my friend Nancy today.  I've had these little wool blocks stitched for a long time, and decided it was time to get this put together.  The sashing is on, now just need to sew them together and add borders.  This is Bud Garden by Lisa Bongean of Primitive Gatherings.  I bought this kit a few years ago when I helped vend in their booth in Des Moines, and stitched on the blocks quite a bit when I was in Florida with my brother.  Lots of memories with this little quilt!  It will only be 20" x 29" when finished. 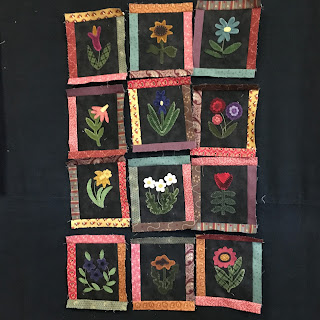 Now it's down to the sweat shop to finish up more jewelry to take to Dallas.  We are going to have loads of boxes and stars too - so fun!
Posted by Me and My Stitches at 4:46 PM 7 comments:

I forgot to share my newest Quilt Dots with you.  I love these magnets and it's really fun to have my newest quilt design on them - this is Patriotic Pineapples.  I like the 2 different versions - one close up and one a little further back.  Fun! 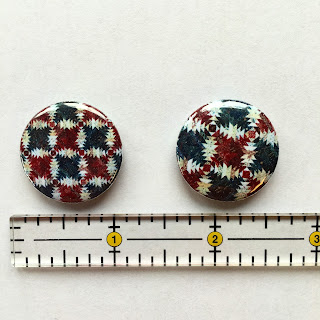 Here's Ozzie taking a little snooze - I thought he looked cute.  The bear above him was made from a fur coat that belonged to my Grandma, and the corner chair that he's sleeping on also came from my grandparents' house.  Oh, and so did the cabinet next to the chair.  All kinds of stuff in here from Grandma and Grandpa!  My nice aunt gave me the crock. 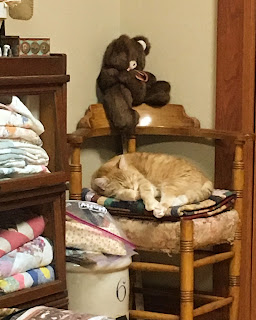 Now it's back to organizing and packing for Dallas!

I can't believe that we leave for Dallas next week!  Yikes!!!  We have been working like crazy to get everything ready to go. These stars made from our yardsticks are a new item - we were debating on which color of stain we like.  I like them both!  The one on the right is a new (to us) one.  We have 3 different sizes of these stars - so fun! 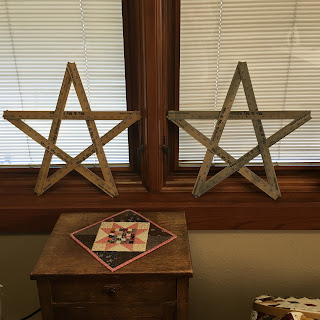 I was low on pineapple and log cabin pendants, so we finished some of them... 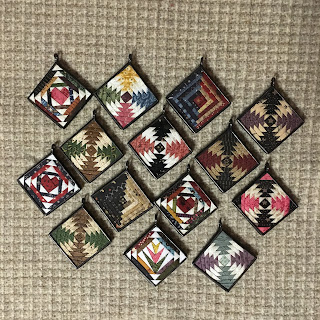 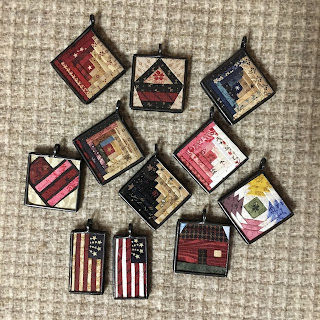 And I was really low on pendants with added bling, so we made a few more of those... 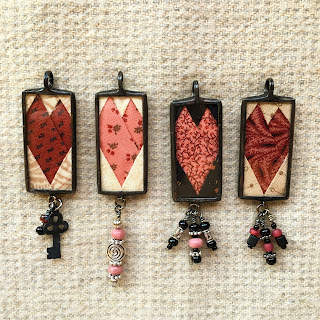 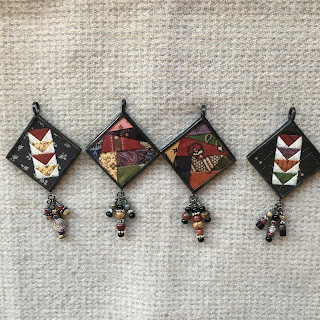 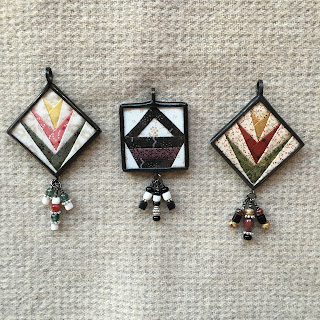 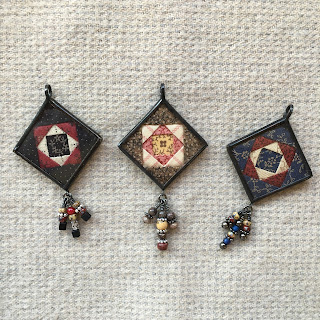 On my last post I think I said that was the 6th of my Home for the Holidays blocks, but I forgot that I hadn't shown a picture of this one yet... 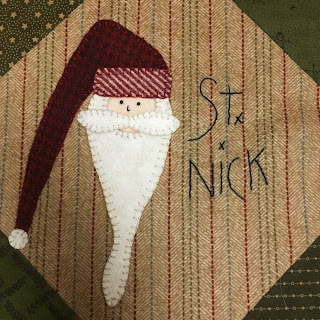 Now I'm back to working on my bee blocks and will share that when I get another one finished.  They have a lot more stitching that the Home for the Holidays blocks.

I also wanted to share the details about the show in Dallas...

I'm excited that my niece is going with me again.  Hubby is staying home and taking care of all of the fluffies.  I've always heard really great things about this show, so if you are anywhere in the Dallas area, please come and visit!!   Click here for the link for more info.